Dame Barbara Stocking became the 5th President of Murray Edwards College in July 2013. In March 2015, she was appointed Chair of the Independent Panel of Experts to assess the World Health Organization’s response in the Ebola outbreak. The report was published in July 2015. From May 2001 to February 2013, Barbara was Chief Executive of Oxfam GB and before that, a member of the top management team of the NHS, as regional director for the South East of England, and then as the founding Director of the NHS Modernisation Agency.

Former President Laura Chinchilla is a political scientist with a Master’s in public policy from Georgetown University. She was the first woman to be elected president of Costa Rica (2010-2014). Previously, she served as minister of public security (1996-1998), congresswoman (2002-2006), minister of justice (2006-2008), and vice president (2006-2008). During her political career, Mrs. Chinchilla prompted police and justice reform measures to tackle crime and violence, digital and open government, the promotion of women’s rights, and early childhood protection. She also promoted environmental sustainability policies, especially on preserving marine biodiversity, for which she was distinguished with international awards. Mrs. Chinchilla has worked as a consultant with various international organizations, such as: the Interamerican Development Bank (IDB), the United Nations Development Program (UNDP) and the United States Agency for International Development (USAID). She has taught at the Institute of Politics and Public Policy of Georgetown University (USA), the Instituto Tecnológico de Monterrey (México), and the Universidade de Sao Paulo (Brazil).

Director, WHO Collaborating Center on National and Global Health Law

Lawrence O. Gostin is University Professor, Georgetown University’s highest academic rank, and founding O’Neill Chair in Global Health Law. He directs the World Health Organization Center on National and Global Health Law. He served on the WHO / Global Fund Blue Ribbon Expert Panel on equitable access to the Global Health and co-chaired the Lancet Commission on Global Health Law. Professor Gostin served on two commissions on the global West Africa Ebola epidemic, and was senior advisor to the UN Secretary General. Professor Gostin also served on the drafting team for the G-7 summit in Tokyo on global health security. In addition to serving as a member of the Panel for a Global Public Health Convention, he also serves on the panel for the Global Health Security Index. Professor Gostin is also Global Health Editor of the Journal of the American Medical Association. He’s a member of the National Academy of Medicine and sits on its global Health Board. In the United Kingdom, he is Honorary Fellow of the Royal Institute of Public Health. President Obama appointed Professor Gostin to the President’s National Cancer Advisory Board. The American Public Health Association Law awarded Gostin its Distinguished Lifetime Achievement Award. The National Consumer Council bestowed Prof. Gostin with the Rose Delbridge Memorial Award for the person “who has most influenced Parliament and government to act for the welfare of society.”

José Ángel Gurría is the former secretary-general of the OECD. As Mexico’s minister of Foreign Affairs from December 1994 to January 1998, he made dialogue and consensus-building one of the hallmarks of his approach to global issues. From January 1998 to December 2000, he was Mexico’s minister of finance and public credit. For the first time in a generation, he steered Mexico’s economy through a change of administration without a recurrence of the financial crises that had previously dogged such changes. As OECD secretary-general, since June 2006, Gurría reinforced the OECD’s role as a “hub” for global dialogue and debate on economic policy issues while pursuing internal modernization and reform. Under his leadership, the OECD expanded its membership and strengthened its links with major emerging economies. The OECD is now an active participant in both the G-8 and the G-20 Summit processes. Mr. Gurría also reinforced the impact of OECD work in several domains, and steered the launching of high-profile initiatives, including several strategies in the domain of innovation, green growth, gender, development, and skills. Mr. Gurría has participated in various international not-for-profit bodies, including the Population Council, based in New York, and the Center for Global Development based in Washington. He chaired the International Task Force on Financing Water for All and continues to be deeply involved in water issues, being a member of the United Nations Secretary General Advisory Board (UNSGAB) and of the World Economic Forum’s Global Agenda Council on Water Security. In 2007, Mr. Gurría was the first recipient of the Globalist of the Year Award of the Canadian International Council to honour his efforts as a global citizen to promote trans-nationalism, inclusiveness and a global consciousness.

Jane Halton, P.S.M., Officer of the Order of Australia

Jane Halton is a former Secretary of the Australian Department of Finance, responsible for supporting the delivery of the Australian Government Budget, the ongoing management of the Australian Government’s non-defence domestic property portfolio, key assets and asset sales, plus the financial and performance framework for Australian Government agencies. She has extensive experience in finance, insurance, risk management, information technology, human resources, health and aging, sport, and public policy, as well as significant international experience. In a 33-year career within the public service, including nearly 15 years as Secretary, Ms. Halton’s previous roles include Secretary of the Australian Department of Health, Secretary for the Department of Health and Ageing, and Executive Co-ordinator (Deputy Secretary) of the Department of the Prime Minister and Cabinet. Ms. Halton is a member of the Boards of the Australia and New Zealand Banking Group (ANZ Bank), Clayton Utz, and the Australian Strategic Policy Institute. She is also a member of the Board for the Coalition for Epidemic Preparedness Innovations. Previously, Ms. Halton has held numerous international appointments including the Executive Board of the World Health Organization (2004–2007), President of the World Health Assembly (2007), Chair of the Executive Board of WHO, and Chair of the OECD Health Committee (2007–2012). Ms. Halton holds the positions of Adjunct Professor at the University of Sydney, and Adjunct Professor at the University of Canberra. She also holds a Doctorate of Letters Honoris Causa from the University of New South Wales. She was awarded the Public Service Medal in2002, the Centenary Medal in 2003, and the Geneva Health Prize in 2013. In 2016, Ms. Halton became one of a small number of international members elected to the National Academy of Medicine in the United States.

Vice-President of the Social Democratic Party
Parliamentary Board, National Parliament of Portugal

Ricardo Baptista Leite is a medical doctor trained in infectious diseases, a member of the Portuguese National Parliament, Vice-President of the Social Democratic Party Parliamentary Board, and National Spokesperson for Health of the Social Democratic Party. He is the Founder and President of UNITE – Global Parliamentarians Network to End Infectious Diseases, a global platform of policymakers committed to ending these public health threats by 2030. Dr. Leite is also Vice President of the Parliamentary Network on The World Bank & International Monetary Fund and Global Ambassador of the G20 Health & Development Partnership aimed at advising and advocating G20 countries on health policies aligned with the UN Sustainable Development Goals. One of the six people to be awarded globally as a HCV Change Maker by The Economist in acknowledgement of leadership in the field of hepatitis C, he is the Head of Public Health at Católica University of Portugal. Prior to being elected MP, Dr. Baptista Leite worked as a practicing physician, including a 5-year Infectious Diseases residency program at the Western Lisbon Hospital. Dr. Leite is the founder of CREATING HEALTH – Research and Innovation Funding, co-founder of the ‘Estoril Conferences,’ and the main author of the book ‘Citizenship for Health.’

Former Vice-President, Minister of Communications and Member of Parliament, Ghana

John Dramani Mahama is a Ghanaian politician who served as President of Ghana from July 2012 to January 2017. He previously served as Vice President of Ghana from 2009 to 2012, and took office as President on July 24, 2012 following the death of his predecessor, John Atta Mills. He was elected president later that year and served until 2017. A communication expert, historian, and writer, Mahama was a Member of Parliament from 1997 to 2009 and Minister of Communications from 1998 to 2001. He is a member of the National Democratic Congress. 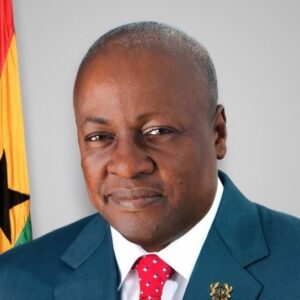 Dr. Mahmood is a medical professional with more than two decades experience managing crises in health, disasters and conflict settings. She is currently the Special Advisor to the Prime Minister of Malaysia on Public Health. She is also a member of the Government of Malaysia’s Economic Action Council. Her previous appointments include the Under Secretary General for Partnerships at the International Federation of Red Cross and Red Crescent Societies (IFRC), Chief of the World Humanitarian Summit secretariat at the United Nations, and Chief of the Humanitarian Response Branch at UNFPA. She is the founder of MERCY Malaysia, a southern based international humanitarian organization. Dr. Mahmood has held many Board positions and is the recipient of numerous national and international awards for her work. In 2020, she was appointed a Senior Fellow of the Adrienne Arsht-Rockefeller Foundation Resilience Centre. Dr Mahmood graduated as a Doctor of Medicine (MD) has a Master’s in Obstetrics & Gynaecology from the same university and is a Fellow of the Royal College of Obstetricians and Gynaecologists United Kingdom. She also completed executive education at the International Management and Development Centre, IMD Lausanne.

Member and Former Board Chair, RBM Partnership to End Malaria

Former Board Member of The Global Fund To Fight AIDS, Tuberculosis and Malaria

Dr. Winnie Mpanju-Shumbusho brings a multi-faceted perspective to the Panel, including her track record and unwavering commitment to strengthening the world’s ability to prevent, prepare, and respond to infectious disease outbreaks before they become widespread pandemics. She served as the WHO’s Assistant Director General for HIV/AIDS, Tuberculosis, Malaria and Neglected Tropical Diseases until 2016. Previously, Dr. Mpanju-Shumbusho directed the WHO’s Office for Global Fund Partnership and Technical Cooperation, including WHO’s technical support to countries, that facilitated eligible countries’ access and utilisation of more than 10 billion USD from the Global Fund to Fight AIDS, Tuberculosis and Malaria and contributed to health systems strengthening. Earlier Dr Mpanju-Shumbusho served as Director of the WHO’s HIV/AIDS and Sexually Transmitted Infections Programme and co-founder of the WHO 3by5 Initiative. She has also served as a member of international boards including the Global Fund Board, UNICEF-UNDP-World Bank-WHO Special Programme for Research & Training in Tropical Diseases Board and UNAIDS Board. Prior to joining WHO, Dr Mpanju-Shumbusho served as Director General of the Commonwealth Regional Health Community Secretariat for East, Central and Southern Africa (East, Central and Southern Africa Health Community Secretariat), where she spearheaded policies and mobilised political commitment, partnerships and considerable resources to tackle the Region’s public health priorities. She also served as Head of the University of Dar-es-salaam’s Department of Community Health and Chief Public Health Adviser to the Ministry of Health of Tanzania; and International Monitor of multi-country clinical trials for medicines and vaccines on behalf WHO and TDR. Dr. Mpanju-Shumbusho has won various leadership, humanitarian and academic awards, including the AHEAD Humanitarian Award; and has published widely.

Former Director General, National Center for the Prevention and Control of HIV/AIDS, Mexico

Dr. Jorge Saavedra MD, MPH, MSc, is a Medical Doctor from the National Autonomous University of Mexico, has two master’s degrees from Harvard, one in Public Health and a second in Health Policy and Management. Prior to joining AHF, he was also the first director of the largest HIV clinic in Latin America (Clinica Condesa) in Mexico City during 2000 and served as Director General of the National Center for AIDS Prevention and Control in Mexico (CENSIDA) from 2003-2009, and later as AHF’s Global Public Health Ambassador. He currently serves as the Executive Director at the AHF Global Public Health Institute at the University of Miami.

Head of Secretariat, Panel for a Global Public Health Convention

The World Needs a Treaty With Teeth

Join our call to action and get connected!

Funding for this project was provided by the AHF Global Public Health Institute at the University of Miami, AIDS Healthcare Foundation. For more information, please contact secretariat@gphcpanel.org. View our Privacy Policy.
© Panel for a Global Public Health Convention